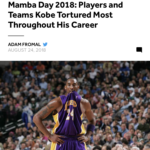 Kobe Bryant spared no one on the basketball court.

If you were wearing a different jersey, you were a target. His mentality was that focused on equal-opportunity destruction—a hallmark for a player whose greatness was predicated in large part on his indefatigable competitive fire.

But some players and teams wound up feeling his wrath more frequently than others, and it’s those we’ll be covering on this latest edition of Mamba Day. Whether they fell prey to his trash-talking habits, wound up on the wrong end of notable highlights or simply couldn’t slow him down, they all have one thing in common.

Based on their history with No. 8/24, they can’t be too displeased that he’s retired and unable to do further damage.